Although not your stereotypical type of razor, a good eyebrow razor can be the perfect thing to have in your grooming kit at home. Whilst many of us are used to using tweezers to pluck our eyebrows, that isn’t the only option you can take to shape your eyebrows nowadays. This is especially true if you have thicker eyebrows, as it can be quite painful to pluck all of your hairs out.

Getting rid of unwanted facial hair shouldn’t be that much of a chore, and an eyebrow trimmer can help with that. But when you’re looking for the best eyebrow razors, what exactly should you be looking for? Well, here are a few of the things that you’re going to want to consider. 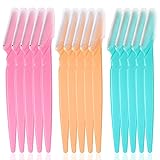 The thing with eyebrow razors is that many of them are actually made by the same company, but sold by different independent companies. If you see this type of colourful eyebrow razor, then it’s likely imported very cheaply from China, so they’ll all be of the same quality. So, you should just be looking for the brand which provides the most value for money, and in this case, the value is the amount of eyebrow razors you get in a pack!

This brand sells them very cheaply, and you can get a pack of 15 eyebrow razors for just a few quid. So, if you’re just looking for a basic eyebrow razor for a cheap price, then this pack is going to be one you want to consider.

If you’d like a slightly better quality of eyebrow razor, then I’ve used these Wilkinsons Sword ones and they’re pretty good, They’re still just an eyebrow razor, but they do provide a simple design that makes it very easy for you to shape your eyebrows. The blades are of a very high quality, and are perfect for shaving down the thinner hair on your face.

These razors also come with a small cap on the top of the razor, which can help protect them and give you the ability to reuse them over and over again. So, for those looking for a little higher quality eyebrow razor, then this set might be a better idea. 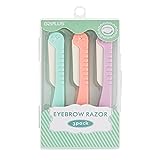 Another higher than average quality set of eyebrows razors is this set from G2PLUS. They’re just over 6 inches in length, and they’re perfect for shaving that peach fuzz away. You can use these razors not only for your eyebrows, but also for your ‘tache and any chin hairs too. They’re very lightweight, and they fold away too, so if you have kids then it might be an idea to get a set like this.

These eyebrow razors are particularly sharp, so you’re going to need to be quite careful when you’re using them. But if you’re looking for another good set of eyebrow razors, then this set is definitely worth considering.

How To Use an Eyebrow Razor – Top tips

If you’re not exactly sure on how to use an eyebrow razor, then here are a few tips that you can use to get a better idea of what you want to be doing. Eyebrow razors are becoming even more popular nowadays, so you’ll want to know exactly how to use one.

And the truth is that they’re all very similar to one another. That means that once you get used to using it, you’ll be able to use pretty much any eyebrow razor out there. Here’s a few tips to get rid of your eyebrow hair;

A facial razor is only meant to be part of your whole grooming kit. You should also get yourself a set of tweezers too, especially if you want to increase the time between facial hair removal. You can also look at a good pair of eyebrow scissors if you want to cut them down to a certain length.

What are eyebrow razors?

Why should I use an eyebrow razor?

The skin around your eyebrows tends to be very delicate. Whilst some people do just use a regular razor to shave their eyebrows, you’d likely be much better off using an eyebrow razor. This can help to reduce any irritation you feel on your brow. The size of the eyebrow razor is also an advantage, as it will allow you to shape them easier.

Do your eyebrows grow back thicker if you shave them?

No, your eyebrows won’t grow back thicker if you decide to shave them off. They may look thicker for a short while, as when they grow back, they won’t have the tapered end they once had. however, after a while your eyebrows will taper off at the end, returning them to normal.

How many times can you use an eyebrow razor?

Although there’s no hard rule to how many times you should use an eyebrow razor, the majority of people will only use it 3 or 4 times before throwing it away. This is because they’re relatively cheap, so you don’t have to worry about it too much.

Is shaving my eyebrows better than tweezing?

Many people use a combination of both plucking their eyebrows with a tweezer, and shaving them with a small eyebrow razor too. An eyebrow razor is painless, and can be the perfect way to quickly adjust your eyebrows without causing any redness, which happens when you pluck them.

All in all, there isn’t a massive difference between the eyebrow razors that are currently out there. They’re all made with the same intention in mind – giving you the ability to turn thick, unkempt eyebrows into more styled, attractive ones. Many women (& men!) also opt to use an eyebrow razor on their top lip as well, to get rid of any slight mustache.

Along with a normal woman’s razor, an eyebrow razor can just be another part of your toolkit for your own beauty routine.